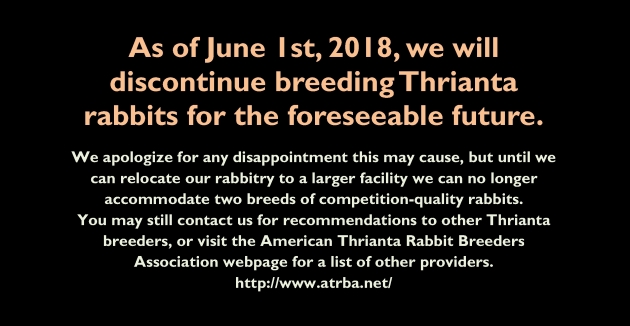 Appearance.  The Thrianta (pronounced TREE-ont-a) is an eye-catching, brilliant red rabbit with fawn coloring under its paws and tail. The fur is soft, dense and medium in length. The ideal senior weight for this compact breed is 5 to 6 pounds. The coat is scarlet and orange, similar to the color of an Irish Setter. According to the American Rabbit Breeders’ Association, Thriantas should pose short and compact, with straight ears that are supposed to be red all around.

Prices.  Thriantas are $85 (and up) for pedigreed /show quality.
Pet-quality (when available) are $60.

*Please remember, we breed champion-quality, pedigreed show rabbits, NOT pet quality.  Occasionally we have pet-quality animals available due to their having demonstrated some disqualifying trait.  All competition-quality animals are sold at their premium price, regardless of the buyer’s intention to show them or not.  Pet-quality rabbits are offered at our discretion, NOT as a lower-priced alternative.

History. The Thrianta began when Mr. H. Andreae from Assen in the Netherlands created orangey-colored rabbits in 1938, having used Black Tan, Havana and a self colored English Spot. Thriantas were named for the region of their birth. Andreae contributed in the drafting of a breed standard, recommending various changes to the original planned text. The breed was admitted to the Dutch standards on May 1, 1940, but with a rather remarkable description of the color to show the descendent of the Tan, in that the orange top color was required to show a hint of brown coloration in it.

World War II took a great toll on the Thrianta breed in Holland. Little promotion could be done, many animals had to be eaten to avoid starvation, or were seized by the Germans for the same reason. By the end of the war, Andreae’s breed was all but extinct. The Nederlandse Konjinenfokkers Bond (NKB) listed the Thrianta as the ‘Orange Tan’ in their 1957 standards, but by 1966, they were no longer recognized. H. Andreae died in 1959. A German breeder, Dr. Kissner, is believe to have imported most of the remaining Thriantas to improve the color in his Sachsengold variety.

In 1976 a Dutch specialty club was formed for Andreae’s creation, but even before the founding of the club, many staunch fanciers voiced their opinions loud and clear that the breed should once again be known as Thrianta. Thus was born the Thrianta SpeciaalClub in the Netherlands. It should be noted that most of Europe recognizes the Sachsengold and not the somewhat smaller and bolder Thrianta.

England imported Thriantas in early 1980 from Holland and they are now recognized by the British Rabbit Council, yet overseen by the Rare Varieties Club in the UK. In 1987, in an effort to develop the Red Netherland Dwarf, the late Bob Pettit of Illinois told Judith Oldenburg-Graf of Iowa, that there was a small orange-red rabbit he had heard about somewhere in Europe. Judith began a letter writing campaign to locate animals and in 1996 she traveled to Holland and bought 5 does and 3 bucks from Thrianta breeder B. de Bruin. In 1998, Lew Bevan from England brought to America a pair of Thriantas which Glen Carr of Illinois managed to acquire. Judith Oldenburg-Graf became the first holder of an ARBA Certificate of Development and Glen Carr the second certificate holder. Judith presented the Thriantas in 2001 at San Diego, CA and 2002 at Peoria, IL but sadly the breed was rejected at both presentations. Glen Carr presented in Wichita, KS on November 5, 2003 to a unanimous approval by the Standards Committee. It was also at this time that the idea of the American Thrianta Rabbit Breeders Association (ATRBA) was born, founded by Glen Carr, Carrol Hooks and Bob Whitman. The ATRBA officially kicked off on January 1, 2004. On October 26, 2005 at Indianapolis, IN the breed was unanimously approved, becoming the first new rabbit breed recognized by the ARBA since 1988, and received full recognition by the ARBA on February 1, 2006. After such a troubled beginning, we are proud to have the Thrianta breed in America to stay.

Flemish babies will be available for new homesFebruary 24, 2018
Please add your name and contact infomormation to our Waiting List.

Lakeland, (Central Florida, between Tampa and Orlando.)
863-648-5392
(no calls after 9pm please)
Visit the Waiting List page to leave a comment or question.

Make a deposit or purchase